Albany’s rural cemetery can be a lovely place for a stroll. As spring arrives, we asked Paula Lemire, who studies the history of Albany’s august park-like cemetery for Albany Rural – Beyond The Graves, to share some of her favorite landmarks there.

If one spends enough time walking and exploring the 467 acres of rural Albany cemetery, it becomes very difficult to choose one’s favorite monument. With over 200 numbered sections and thousands of graves ranging from crumbling sandstone slabs to larger-than-life statues, I fall in love with a new favorite with every visit.

That said, here are a few of my favorites – at least until the next walk. 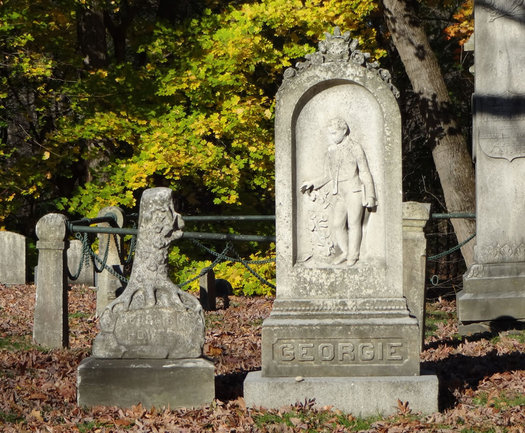 This gravestone caught my eye on my first visit to the rural cemetery years ago. At the time, someone had left a small jar of little thoughts at its base. Another time, I found stuck marigolds.

The weathered white marble shows a well-dressed young boy, an open book in one hand, pausing beside a tree stump shrouded in morning glory vines (the stump and the flowers are both symbols of premature death).

There is an old story that this eleven year old boy was fatally stung by a bee on his way home from school and his sculpted likeness is staring at the bee as it comes to rest on his hand. The sculpture is (or was before the elements eroded some of the monument’s finer details) makes it a butterfly, a symbol of rebirth. Contrary to history, however, the burial records show that eleven-year-old George M. Shortiss died of typhus on February 1, 1861.

Georgie was the only son of George Shortiss and his wife, the former Mary Montheath. Originally from England, the elder George Shortiss was a baking soda merchant with a store at 43 Quay Street and a house at 259 State Street. 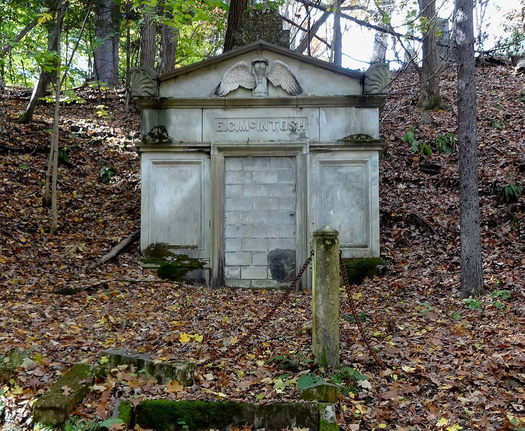 Part of the charm of this vault is its location. It is not visible from any of the main roads and is only accessible by isolated paths through the ravine that separates the southern and middle ridges. It overlooks a small stone bridge and the dry remains of the Lake of Consecration, where the fountains once sparkled and swans imported from Europe glided.

However, the site has not always been so isolated. When the vault was built, it overlooked one of the first portions of the Tour, a scenic route that visitors can follow through the cemetery. It was a highly visible section and considered top notch real estate. An engraving of the vault was even included in Churchill’s Guide Through Rural Albany Cemetery, the first manual for visitors and future lot owners.

Built partially into the hillside, the McIntosh vault is now missing the statue that once stood at the top, and the door is sealed with masonry blocks. Above the door, a dramatic winged hourglass illustrates the ancient saying “Time flies”. Although the vault is quite large, it contains only two burials: Ezekiel C. McIntosh and his first wife, Delia B. Tisdale. 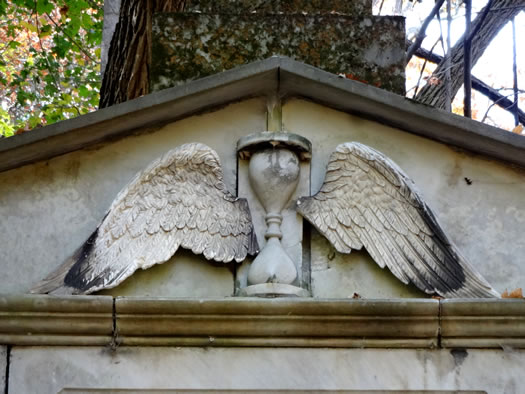 A native of Troy, McIntosh began his business career as a merchant of porcelain, tableware and lamps. With the money from his business venture, he is investing in real estate and, more importantly, in the new rail industry with Erastus Corning and Russell Sage. He was an investor in the Mohawk & Hudson Railroad and later chairman of the Schenectady and Troy Railroad.

Ezekiel McIntosh died on May 23, 1855 at the age of 49. Three years later his wealthy widow (who was described as possessing “a cheerful disposition and a cultivated mind”) married former President Millard Fillmore in the same mansion salon where, in 1780, Alexander Hamilton had married Elizabeth Schuyler.

This old grave even made a cameo appearance in a TV commercial for the iconic 288 nightclub on Lark Street. 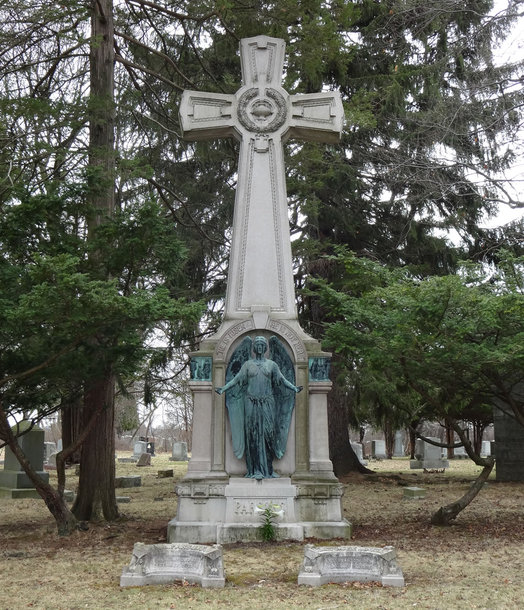 Unlike the McIntosh Crypt, the Parsons Monument is easy to find at the junction of Linden and Cypress avenues. It is an imposing cross of pale stone; at the base, a graceful bronze angel stands with open arms. The monument was one of two collaborations between famous Albany architect Marcus T. Reynolds and Oscar Lenz, a protÃ©gÃ© of Augustus Saint-Gaudens. Reynolds created many works for the rural cemetery, including the main gate to Route 32, the now vacant Superintendent’s Cottage, and several monuments.

Oscar Lenz was born in Providence, Rhode Island. At twelve, he joined the Rhode Island School of Design, and at 16, he joined the Art Students League of New York where he attracted the attention of Saint-Gaudens. Working under Saint-Gaudens, Lenz contributed plaster models of the famous statue of Diana from the tower that stood atop the second Madison Square Garden. He also worked with Saint-Gaudens on several miniatures for the original Penn Station.

In 1906, Lenz created two bronzes for the monument Reynolds had designed for the Parsons family land. The first was the angel who stands framed by an arch. The figure is beautiful and wonderfully detailed, from the delicate folds of her dress to the garland of olive trees that serves as her belt. Although the spots have given the face a gloomy look from afar, the features are refined and the expression soft when seen up close. Closer examination is absolutely necessary to appreciate the intricate bronze frieze that surrounds the sides and rear of the monument. Dozens of figures appear in an ancient funeral procession. There are men and women, infants and the elderly. Some sing hymns written on scrolls, others wear crowns. Some seem hopeful, others are bowed down with grief. 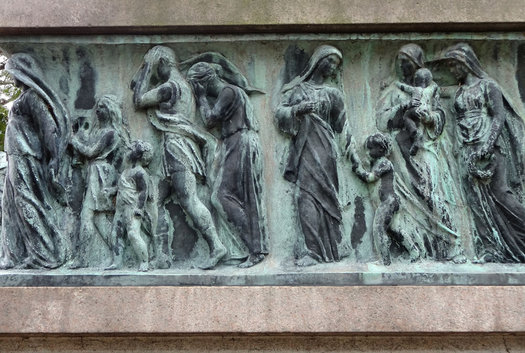 The monument was commissioned by Agnes Chase Parsons, wife of John D. Parsons, Jr., chairman of the Albany Trust Company and the National Exchange Bank, also known for her extensive collection of autographs and rare books. Parsons was a major benefactor of the former Albany Orphan Asylum, which eventually became the Parsons Child and Family Center. John Parsons died at the age of 57 on December 16, 1904. The design of his monument was based on ideas provided by his wife.

Reynolds and Lenz also collaborated at the Hilton Mausoleum just down the Angel Parsons Path in 1909. The simple granite vault features a solid bronze relief that depicts an angel offering a poppy to a seated man. Unfortunately, this will be their last collaboration. Oscar Lenz, a young man of great personal charm and wonderful artistry, died on June 25, 1912. He was 39 years old. 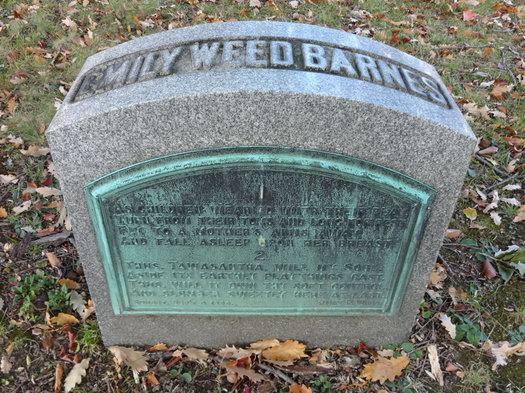 The Weed-Barnes lot is just across Linden Avenue from Angel Parsons. The centerpiece of the lot is a huge dark gray granite well honoring these two influential Albany editors, Thurlow Weed and his son-in-law, William Barnes. Around the imposing obelisk are assorted smaller tombstones.

As the sun set on September 8, 1848, Emily Weed Barnes, then 20, daughter of Thurlow Weed and future wife of William Barnes, wrote the following verses about the rural cemetery, which had only been consecrated four years earlier. :

As the children got tired of playing
Throw away their toys and yearn for rest
Fly into a mother’s arms
And fall asleep on his chest,

So, Tawasentha, my soul
Beside his thrown earthly toys,
So will he have your sweet control.
And sleep softly here at last.

Tawasentha was Mohawk for “the place of many dead” and was one of the first names proposed for the rural cemetery in Albany. (Naming the cemetery was a surprisingly touchy subject with many letters and editorials in the Albany Argus suggesting and debating various names). The name Tawasentha was most often applied to the Normanskill Valley and was popularized in Longfellow’s Hiawatha song.

Emily Weed was born in 1827 and in 1849 married William Barnes who succeeded her father as editor of the Albany Evening Journal. As the registration secretary of the Albany Army Relief Association during the Civil War, she was active with the famous Albany Army Relief Bazaar (also known as the Sanitary Bazaar) which opened in Academy Park in 1864 This fair raised around $ 85,000 for the Union War. effort and is perhaps best known for the auction of the first draft of the Emancipation Proclamation which was sent to Emily by President Lincoln via a family friend, Secretary of State William Henry Seward. This project is now owned by the New York State Library.

Emily Weed Barnes died on February 10, 1889. The verses she had written 41 years earlier were cast in bronze and affixed to her gravestone. 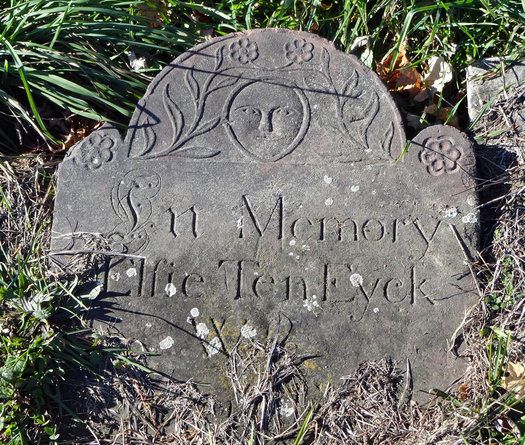 I really like the effigies of souls, winged faces or skulls which were a popular motif on tombstones from the late 17th to early 18th century. While these designs are much less common in Albany than in the Hudson Valley or New England, there are some wonderful examples at the rural cemetery.

This particular soul effigy does not have the usual wings and is simply surrounded by delicate flowers. The expression is serene and direct. It may even have been designed as a simple portrait of the deceased. The stone is unfortunately not signed by the sculptor. 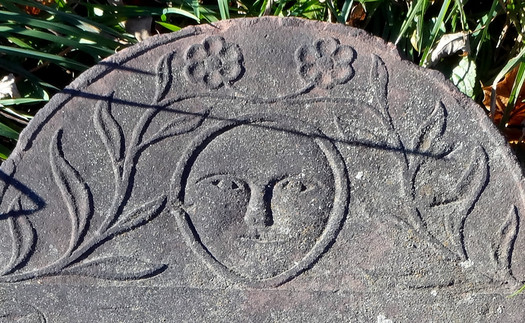 This sandstone bollard was originally erected in the Dutch Reformed Cemetery that once stretched from Beaver Street to Hudson Avenue, just east of South Pearl. Over the years it has been moved several times from the original tomb to an arch under the Second Reformed Church which was built on top of the burial grounds. Eventually, it was placed in the Church Grounds section of the Rural Cemetery next to many old gravestones and relocated remains from the Old State Street Cemetery and other ancient Albany cemeteries.

The stone marked the grave of Elsie Cuyler, wife of Barent C. Ten Eyck. Born in 1728, she married in 1756. Her husband was a prominent silversmith and town councilor in Albany. Elsie died on November 27, 1791. She had no children and her gravestone was probably ordered by Barent, who survived her for four years.

Paula Lemire is the creator of Albany Rural – Beyond The Graves on Facebook.