Plans by billionaire Asda owners to build Europe’s largest Muslim cemetery have been rejected by a council conservation officer.

A report on the 35,000 plot cemetery project in the West Pennines in Lancashire said it would be ‘at odds’ with local heritage.

In a report, Hyndburn Council said the ‘visual unity’ of the surrounding countryside would ‘be lost’ if the 84-acre Issa Memorial Garden was built.

The proposed cemetery, funded by the charitable arm of billionaire brothers Zuber and Mohsin Issa, is expected to cover an area the size of 40 football pitches.

This site, near the small town of Oswaldtwistle, Blackburn, Lancs, would eclipse the largest current Muslim cemetery, The Garden of Peace, in north London, which has 10,000 plots.

Thousands of residents have opposed the plans so far, citing concerns about congestion and its potential effects on wildlife.

Now council officials have raised their own concerns about the cemetery, which is expected to feature a ‘funeral home’, accommodation for the caretaker and more than 660 parking spaces.

A report by the council’s conservation officer says the new development “is visually at odds with the historic landscape”. 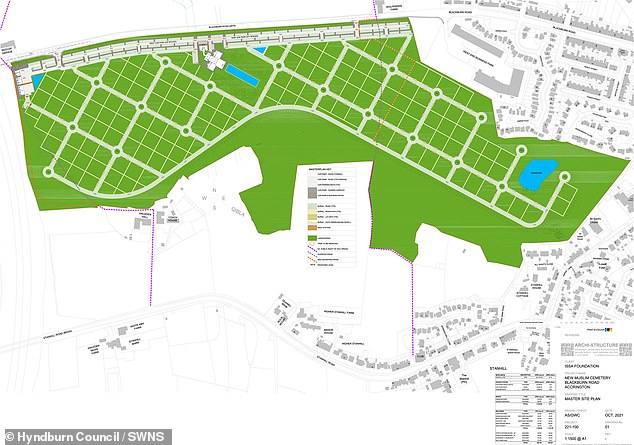 Memorial Garden would be built west of Blackburn, Lancs., and will have 35,000 burial plots” class=”blkBorder img-share” style=”max-width:100%” />

The 84-acre Issa Memorial Garden would be built west of Blackburn, Lancs., and will have 35,000 burial plots

He adds: “The current visual unity of the Greenbelt campaign would be lost and the graveyard would separate the fields of Cow Hill from the surviving fields of Stand Hill.”

“The cut and fill of the proposed development would destroy any archaeological or other heritage assets that lie within the boundaries of the site.

“The project would divert the two historic tracks, which are public footpaths, and detract from the rural setting of the heritage properties described above.”

The damning report now says council leaders will have to weigh in on whether the benefits of the proposal outweigh its potential harms.

It says: “In assessing the application, the case officer and the planning committee will need to decide whether the public benefits of the program outweigh the harm above, taking into account the legal obligation with regard to the establishment of the construction list and other planning issues.

An Environment Agency report, submitted by officials in December, opposed the request because of a possible risk of groundwater pollution.

He said: “The proposed cemetery development could pose an unacceptable risk of groundwater pollution, and it is questionable whether it would meet the minimum requirements.”

In an earlier statement, the Issa Foundation said the cemetery was urgently needed because there was a lack of burial grounds in the North West. 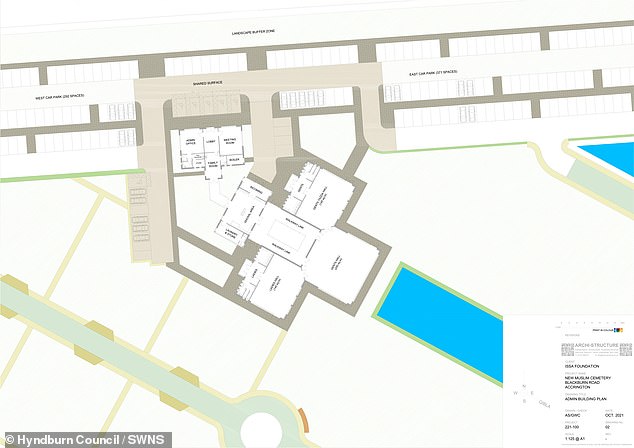 This new site would dwarf the current largest Muslim cemetery, The Garden of Peace, which opened in East London in 2002 and holds 10,000 plots.

They said: ‘The need for Muslim burial plots in the North West of England has become critical, a situation made worse by Covid 19.

“The proposal is a matter of public interest to the Muslim community and is of strategic importance to the North West region.”

The new site is close to the Issa brothers’ £100million Frontier Park complex, which includes a petrol station, several food outlets and a ‘Hampton by Hilton’ hotel.

The foundation said the new development is for the Muslim communities of East Lancashire, serving them for the next 50 to 100 years.

The services he provides will cover all transportation arrangements for the deceased.

This will include picking up the Janaza (deceased) from home, hospital or morgue, transportation to the local mosque or Ghusal (washing) facility, where the Ghusal and wrapping will be performed, and then the final transport to the cemetery.

The burial plots would be oriented “toward the Qibla” – Mecca, as Islamic tradition dictates.

The Issa Foundation was established in 2016 as a non-profit charity.

All proceeds from the business will be used to provide ongoing funeral services within the Muslim community and none of the administrators or volunteers will benefit financially from the service provided.