The house is part of the Cedar Creek and Belle Grove National Historic Park, established by Congress 20 years ago.

During the Civil War, however, the activity around the mansion was very different. Occupancy of the house alternated between Union and Confederate officers, and thousands of soldiers camped on the property as the divided nation fought against slavery and cultural differences.

What makes this park site significant is its relationship to the agricultural landscape of the Shenandoah Valley during the 18th and 19th centuries and the decisive Battle of Cedar Creek in 1864.

The Shenandoah Valley is a long, narrow corridor sheltered by mountains. In the 1700s and 1800s, its fertile soil produced high quality wheat and flour that was sold throughout the colonies and in Europe. Isaac Hite Jr., the son of German immigrants, and his wife Nelly, sister of President James Madison, established Belle Grove Plantation. Unlike most Virginia settlers, they operated their farm, mills, distillery, and blacksmith shop with enslaved black people—a total of 276 during the 70 years the Hite family lived on Belle Grove Plantation. Isaac Hite’s descendants retained the property until the last owner died in 1860.

Hundreds of grain mills dotted the valley along abundant stream beds. The main transportation route for trade in the region was an ancient Native American trail known as the Great Wagon Road, now US Route 11. Because the Shenandoah Valley provided central access between northern and southern states, the Union and Confederate armies fought for this landscape throughout the war.

In September 1864, a month before the decisive battle known as Cedar Creek, Major General Philip Sheridan led 32,000 Union troops to burn most of the grain fields in the Shenandoah Valley – an area of ​​70 miles long and 30 miles wide. Their intention: to hasten the end of the war by destroying the Valley’s ability to feed the Southerners and their Confederate army. “The Burning”, as it was called, lasted 13 days. He destroyed 2,000 barns and 70 mills with all their contents, killing or driving away thousands of cattle.

The Battle of Cedar Creek

During the Union occupation of Belle Grove after The Burning, Sheridan returned to Washington, D.C. His troops remained encamped in the fields around the mansion. Using the screen of a foggy dawn on October 19, Confederate soldiers under the command of Major General Jubal A. Early crossed Cedar Creek and the North Fork of the Shenandoah River to conduct a surprise three-pronged attack.

By mid-morning they had succeeded in driving the Union army north. Thinking they had secured Belle Grove, the Confederates celebrated. As the sun set, they suffered a shock—Union troops reappeared, rallied by Sheridan’s return on horseback, and defeated the Confederates. Forced to flee south into the area devastated by The Burning, they found no food or other resources to strengthen themselves for a return.

The Battle of Cedar Creek was one of the deadliest battles in the Shenandoah Valley, with over 7,600 casualties, two-thirds of whom were Union soldiers. The reversal of fortune, however, cemented Union control over the Shenandoah Valley and lifted the morale of northern voters. Three weeks later Abraham Lincoln was re-elected president and six months later the Civil War ended.

Although badly damaged during the war, Belle Grove and other farms in the Shenandoah Valley have recovered. In 1870, wheat production in the Shenandoah Valley returned to pre-war levels. As the grain industry shifted to the Midwest in the early 20th century, Virginia farmers focused on apples and cattle as their main staples – staples that continue to be produced in the rural areas of the valley today. Belle Grove Plantation remains a working farm. 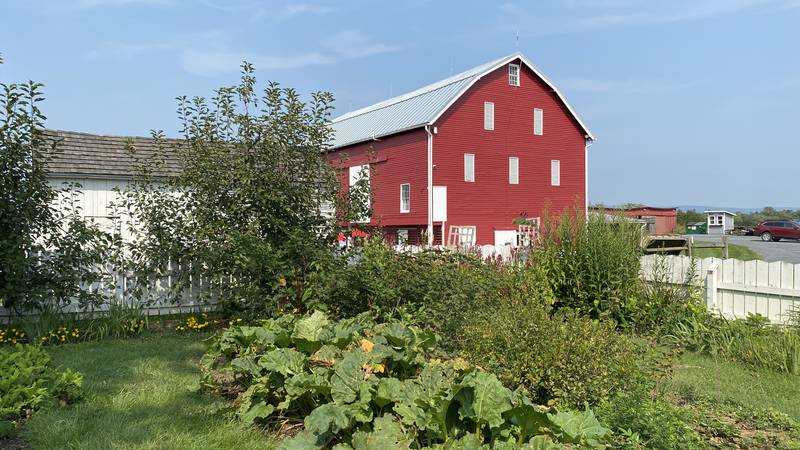 Belle Grove Plantation today includes an educational garden, in the foreground, which is maintained by local garden clubs and master gardeners, and a 1918 barn which houses a visitor center. The barn is a typical Shenandoah Valley design with German influences.

This fall, the National Park Service is considering expanding the boundaries of Cedar Creek and Belle Grove National Historic Park based on new historical research. The Park Service also recently added the site to its National Underground Railroad System at Freedom in recognition of the slaves who freed themselves from the Belle Grove Plantation prior to the abolition of slavery.