On a mountaintop where a village has lost many of its young men, there are no stars and Christmas festivities this year. In the landscape here of mountains that appear blue and rival the shadow of the night sky, the red Christmas stars do not puncture the darkness. They’re not hanging in the misty mountains like road signs. There is a cemetery with fresh graves. They belong to poor men who had Christmas plans.

On December 4, six coal miners were shot dead by security forces in an ambush as they were returning from the Tiru coal mines where they worked from October to May. Villagers said they were singing Christmas carols as the van drove towards the village. In the second shooting, seven more people were killed that night and many more injured.

Among them were twins Thapwang and Langwang, who used to sing in the local church choir. Both worked in the coal mines and had dropped out of school. Their mother, Awan Konyak, said she didn’t know how to let go. She had tried to give away the things that belonged to the twins but she couldn’t let go of the guitar. The guitar sits on their bed as a reminder of days gone by.The village cemetery has 12 fresh graves in memory of the “brothers” and on December 23 the villagers went to the cemetery and lit candles and sang songs for the dead. They sat by the graves all night.

“It was a sad, sleepless night for the whole village,” one villager said over the phone.
He also shared an old video of the twins where they competed in a singing contest at the Konyak youth convention in October 2021. 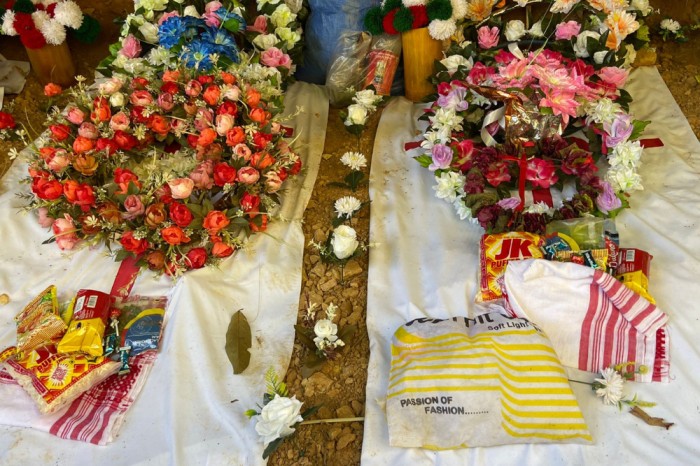 This is how a village remembers its dead. With songs and candles. In the village of around 200 families, moving on is a tough proposition. They know that. They want to build a memorial when they have money. For now, everything is recall. The guitar, the half-finished piece, the wedding suit.