A handful of University of Lincoln students spent their Thursday afternoon cleaning up a cemetery where some of the school’s founders are buried.

Lincoln was founded by two regiments of enfranchised black soldiers who learned to read and write by firelight while training at Army boot camp. Civil War soldiers, whose average salary was $13 a month, raised $6,400 to establish the Lincoln Institute, which eventually became one of two historically black universities in Missouri.

Thirteen of these founders are buried in Woodland-Old City Cemetery on East High Street.

“It’s nice to give back in some way since their dream came true because of us,” said Kim Hampton, a junior who helped clean up the flower beds at the cemetery on Thursday. “We might as well make sure they look good in the afterlife, at least have a nice place to sleep.”

Nancy Thompson, who has been restoring rural cemeteries around Cole County for years and previously served on the city’s cemetery resource board, led the 18 students on a tour of the cemetery before they began raking leaves, to repair and clean the tombstones and to put flags on the graves of the founders who are buried there.

Due to its age, Woodland-Old City Cemetery is a separate cemetery, she said. Blacks, including those who served their country, were buried at the west end of the cemetery.

Thompson said there are 119 verified soldiers buried in Woodland-Old City Cemetery. There are also 750 unmarked graves, more than 300 of which she said are in the area where black people were mainly buried.

The first recorded burial at Woodland-Old City Cemetery was in 1826, Thompson said, and it remained open until the 1920s. The last burial, however, was in 1996 because a family had pre-purchased the plot.

“I thought if I could give them a bit of the flavor of those buried there, it might make their work more meaningful,” Thompson said of the tour.

Ari Pappas, reference and instruction librarian at LU, helped organize the outing for the students. She, too, has experience cleaning up graveyards and said community service is a way for Lincoln students to give back to the people who paved the way for their education.

“I thought, you know, we have the founders who are buried here, and the students are always looking for volunteer opportunities,” she said. “And I thought that would be a great way for students to give back to the founders.”

Lincoln Liberal Studies students can earn up to six hours of course credit for participating in approved community service projects. Students must complete 30 hours of service per credit hour.

Pappas said many Greek Life organizations on campus also require community service, and some faculty have made the release an extra credit assignment.

“Some of these students, especially freshmen, come in and really don’t know about the Founders and their lives,” she said. “And some students don’t know they’re also buried just down the street.”

Alexander Johnson, a first-year psychology student, said he thought it was important to know the origins of his university.

Johnson said he got involved in Thursday’s outing because he was a member of the Freshman Class Council, which works to get students out of their dorms to participate in campus events.

“I feel like Lincoln in particular is interesting because of the soldiers and the Civil War, which is really cool,” he said.

Although it has no connection to his major, Johnson said it was nice to spend the afternoon outside with the story. He wanted to know more about the founders themselves, he said.

“I think it’s pretty cool to see that they’re all close to their heritage,” he added.

Thompson said the help from LU students was wonderful. The graveyard contains a story that can produce stronger feelings than books, she said.

“It’s a huge piece of Jefferson City history there, and it’s falling apart,” Thompson said. “There never seems to be funds to do anything there, so I just jump in and do what little I can.”


Ryan Pivoney/News Tribune Freshman Alexander Johnson was tasked with cutting down a sample of trees growing from a flower bed at Woodland-Old City Cemetery. Johnson was among 18 University of Lincoln students who volunteered to clean up the cemetery on Thursday afternoon. 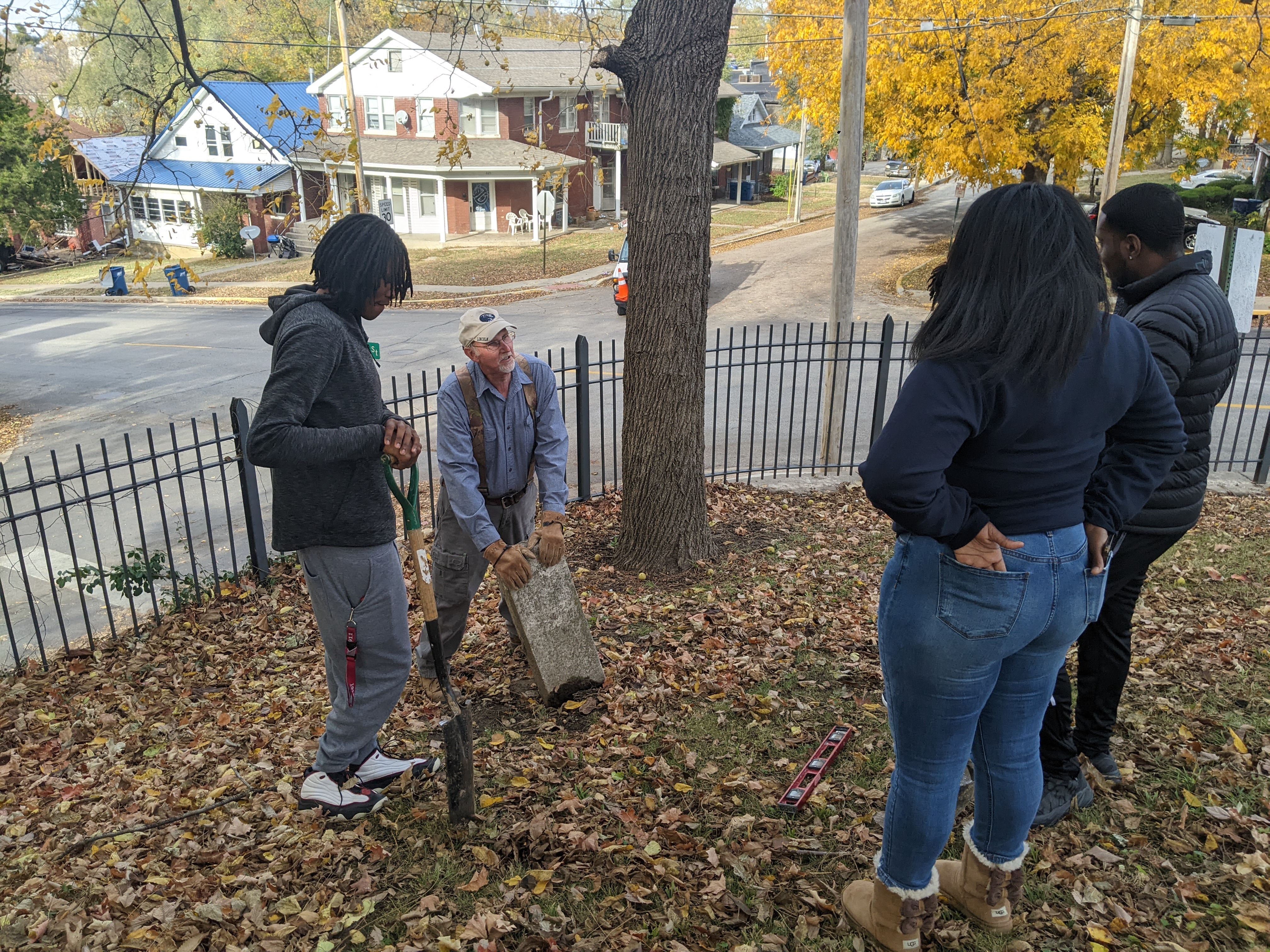 Ryan Pivoney/News Tribune Darryl Strobe showed a group of University of Lincoln students how to reset a headstone Thursday afternoon at Woodland-Old City Cemetery. Strobe has worked on cemetery restorations with several other volunteers for years.