The memorial was unveiled in a ceremony on Monday June 20, attended by around 150 people. State Representative Ronnie Peterson was instrumental in securing Michigan Council of Arts and Cultural Affairs funding for the memorial, while Ypsi-based historian Matthew Siegfried helped research on victims and veterans of the civil war. Ypsilanti-based sculptor and retired professor from Eastern Michigan University (EMU) John Dads designed the memorial.

Additional support was provided by a long list of local veterans groups, including Buffalo Soldiers Detroit. The Palm Leaf Club of Ypsilantian African-American women’s organization, is committed to the long-term upkeep of the memorial. 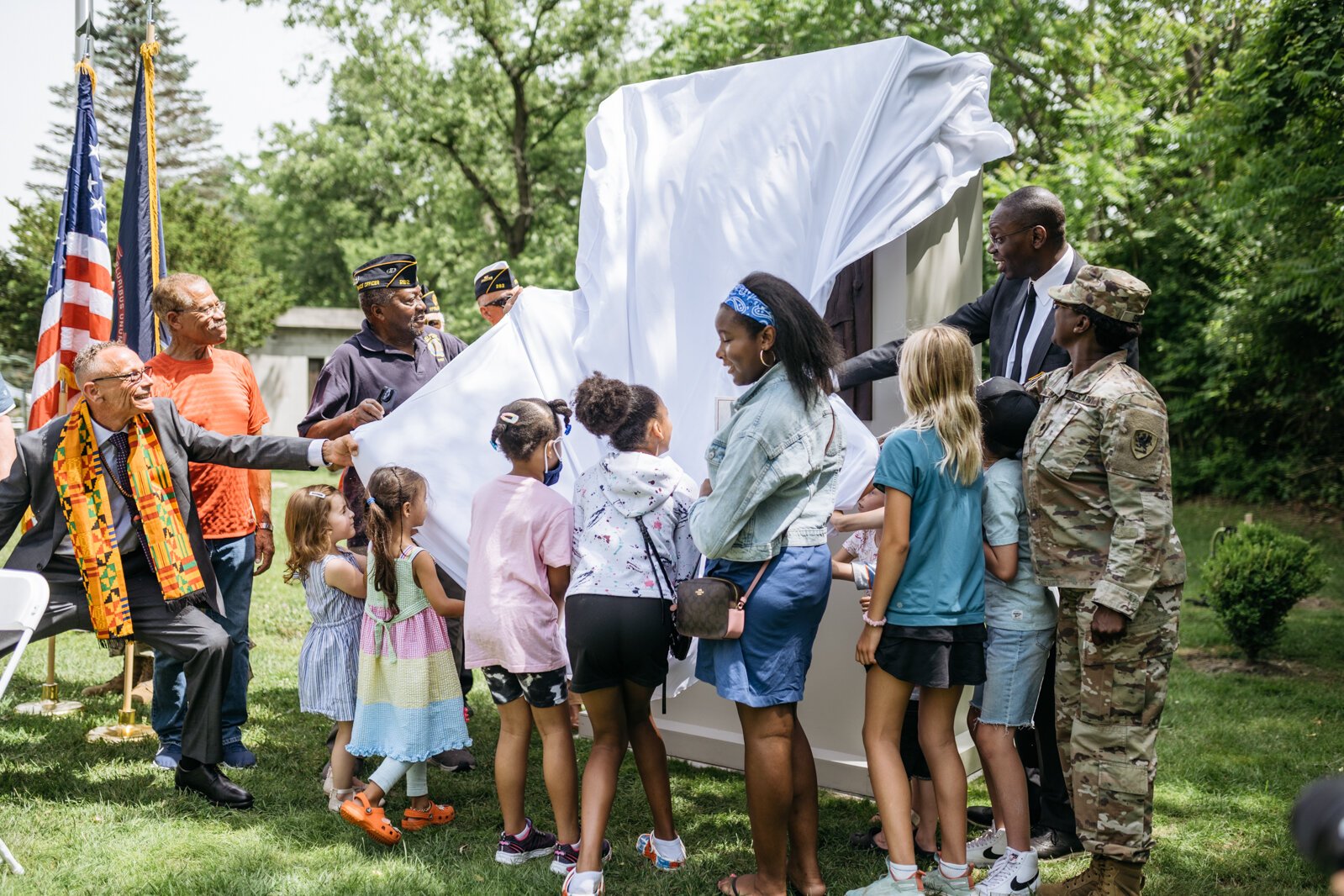 Lieutenant Governor Garlin Gilchrist (right, in costume) helps unveil the monument.
Barry LaRue, Ypsi resident and secretary of the Highland Cemetery Association board, says he and the board are “proud to commemorate [the soldiers’] service alongside all veterans who have served our country during these difficult times. »

There are probably close to 40 Black Civil War victims or veterans buried in the historic Ypsilanti Highland Cemetery. The cemetery records 19 marked graves of Black Civil War soldiers. A further 19 people are thought to be buried on or near Highland land, but records and headstones are missing or incomplete for some of those honored by the memorial. 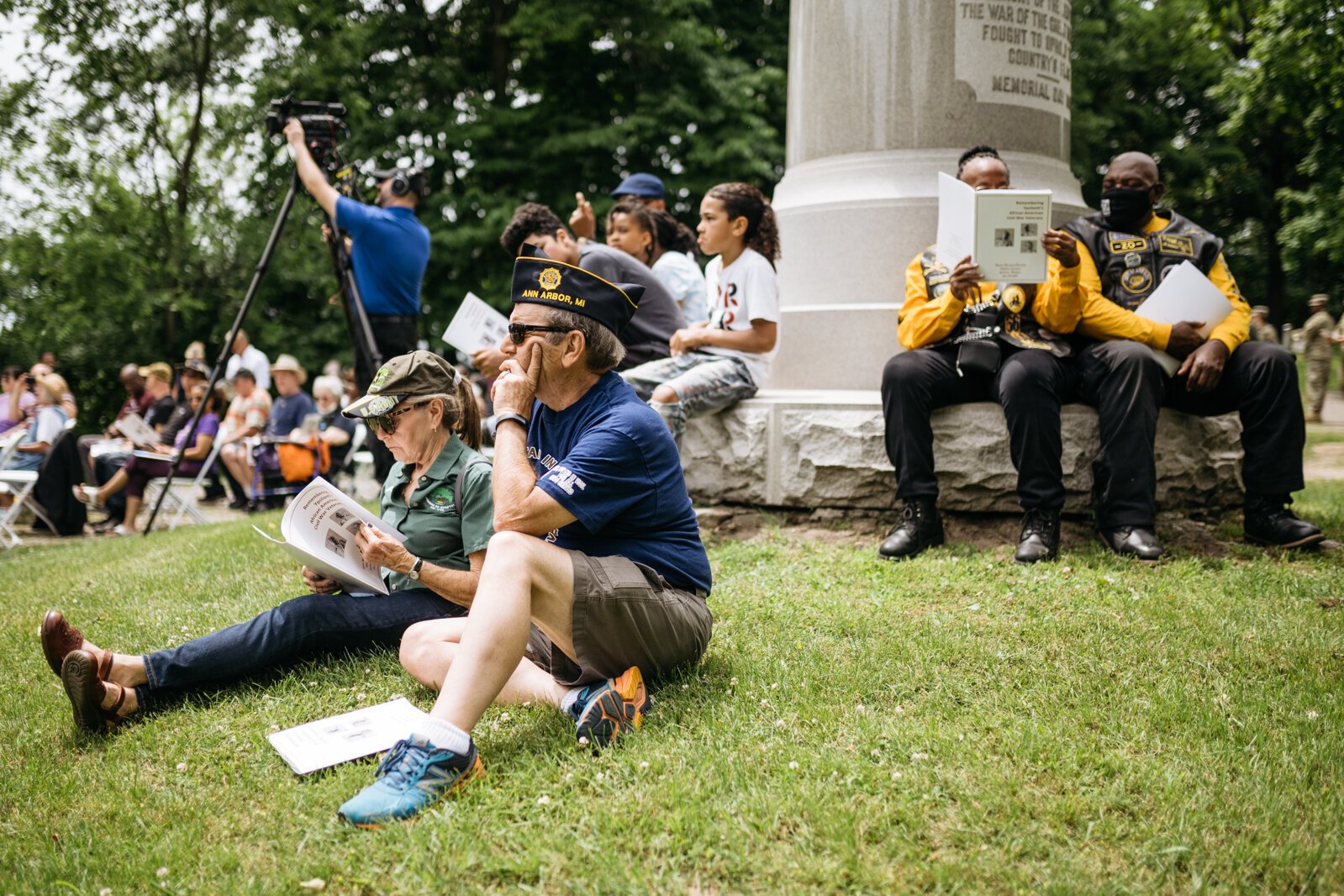 Attendees watch the unveiling ceremony of the monument.
“Highland Cemetery is pleased to have a Veterans Memorial to honor those African-American soldiers who fought to end the scourge of slavery,” LaRue said. “Beginning with the Jim Crow era in the 19th century and spanning much of the 20th, the involvement of these men has been largely ignored.”

Peterson says he attends an annual Memorial Day service every year, and several veterans have pointed out to him that black Civil War soldiers were buried at Highland Cemetery. Military headstones in the veterans’ section of the cemetery indicate the burial of “colored troops,” as they were called at the time, but veterans who spoke to Peterson didn’t feel that was enough. 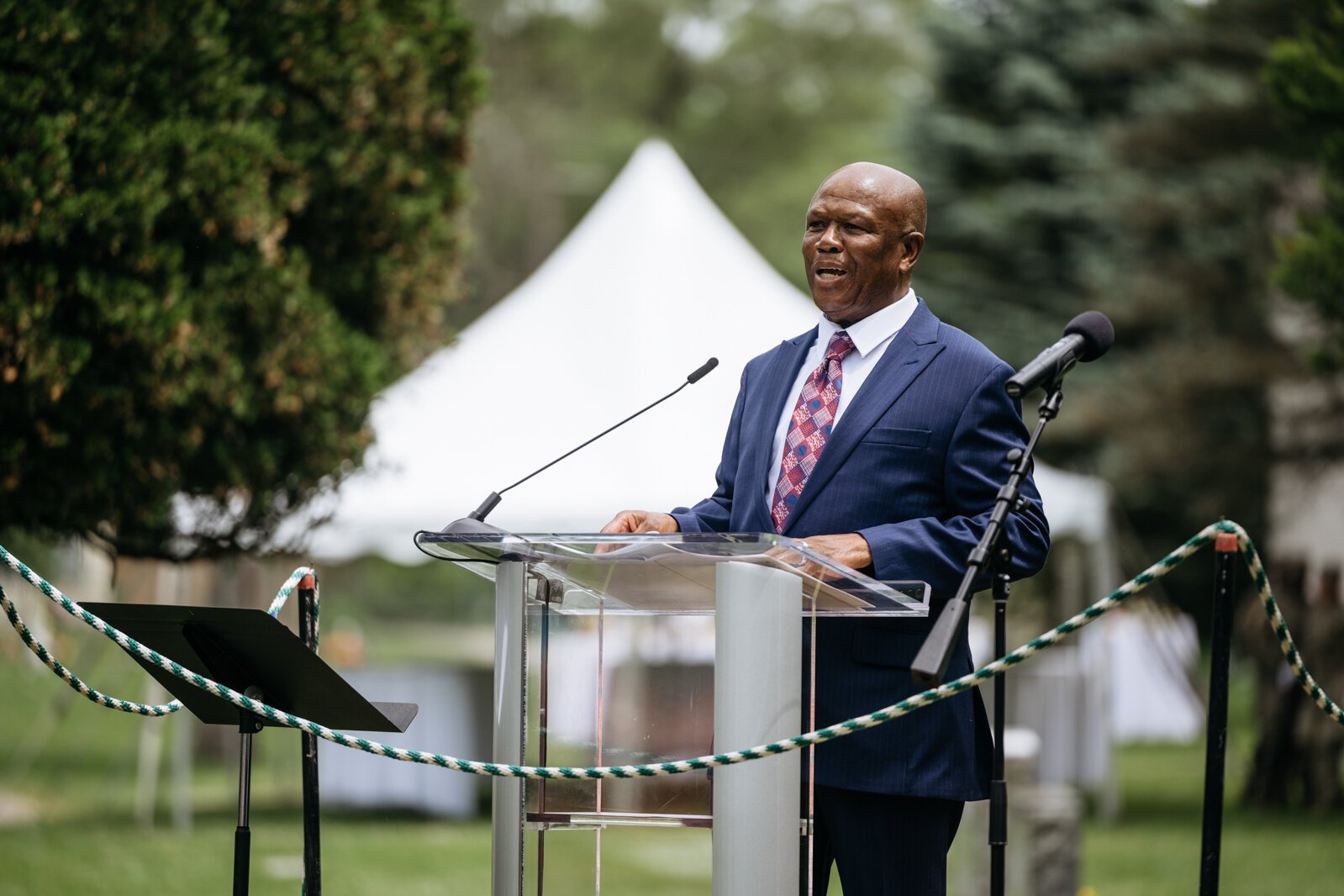 State Representative Ronnie Peterson speaks at the unveiling of the monument.
“They needed more recognition. They went into battle when they were barely free and fought for this country,” Peterson said. “I am a civil rights defender [movement-era] child, and I can’t even imagine that. They can go to fights but cannot eat at a restaurant counter or stay in hotels.”

Black men began serving in the United States Colored Troops (USCT) directly after the Emancipation Proclamation in 1863. Nationally, USCT soldiers comprised 10% of all Union soldiers in the end of the war. Siegfried’s research found that the African-American population of Ypsilanti was particularly eager to serve, with up to 75% of all black men of eligible age and health signing up to serve in the war. civil.

Peterson suggested commissioning Pappas to design the memorial, in part because the sculptor has previously created historical markers in southeast Michigan. Pappas’ works can be found at sites ranging from the EMU campus to the Blue Cross Blue Shield of Michigan headquarters in Detroit. Peterson says he also liked that Pappas was “committed to social justice.” 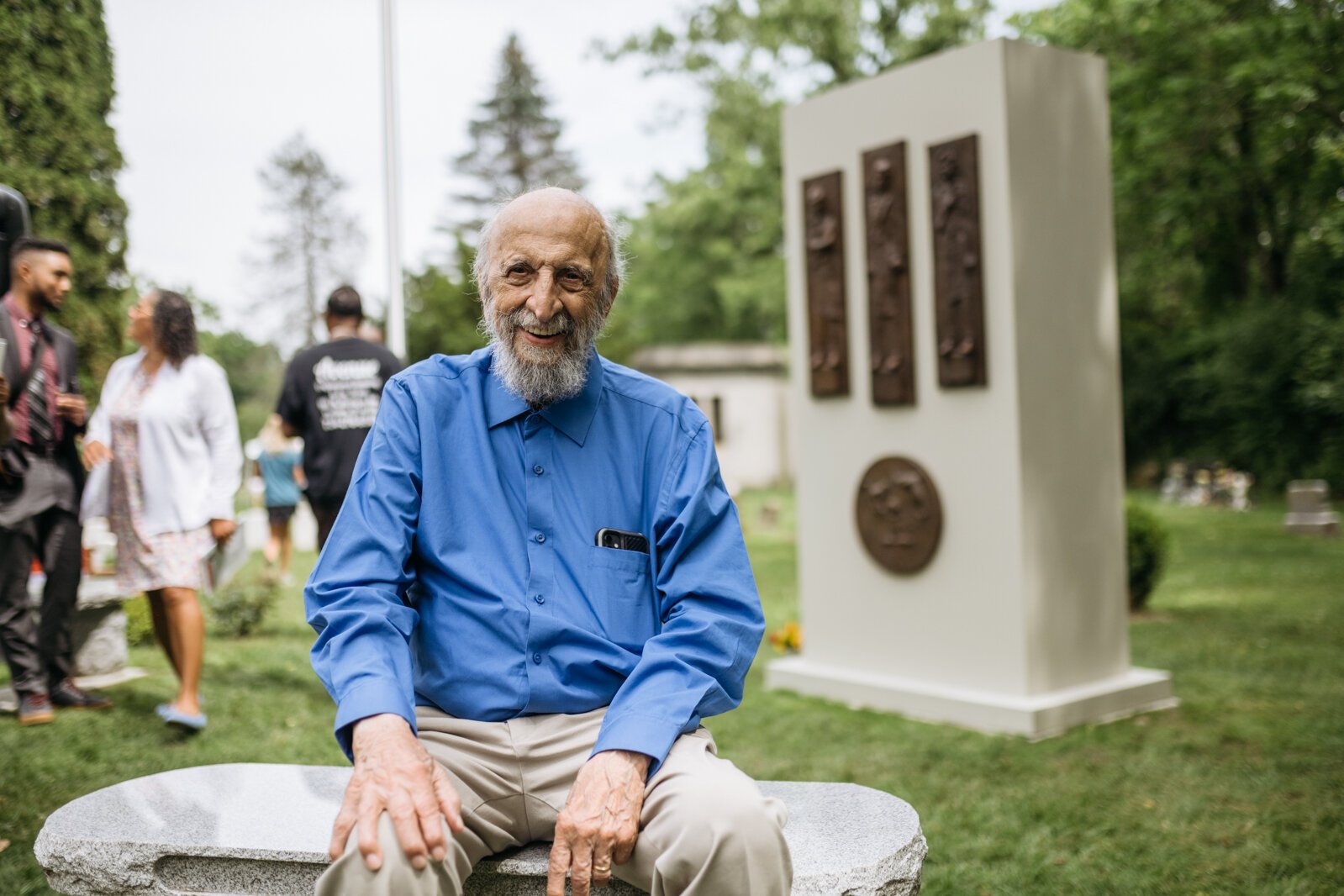 Monument sculptor John Pappas.
Pappas says he researched historic photos and researched the USCT after taking over the memorial. He says learning how these returning soldiers were often treated brought tears to his eyes.

“It broke my heart. I couldn’t believe these guys would go home and get lynched. It made no sense to me,” Pappas said.

The coin went through several iterations, but the final design shows three soldiers, inspired by historical photos from the time, at the top of the coin with three war eagles below. Pappas says he avoided images of weapons because he felt they weren’t central to the monument’s message.

“I thought…I was going to take a much more contemplative look,” he says. “I wasn’t going to show battles and fights. Instead, I was going to focus on this whole idea of ​​these men deciding, ‘What am I going to do with my life?'” 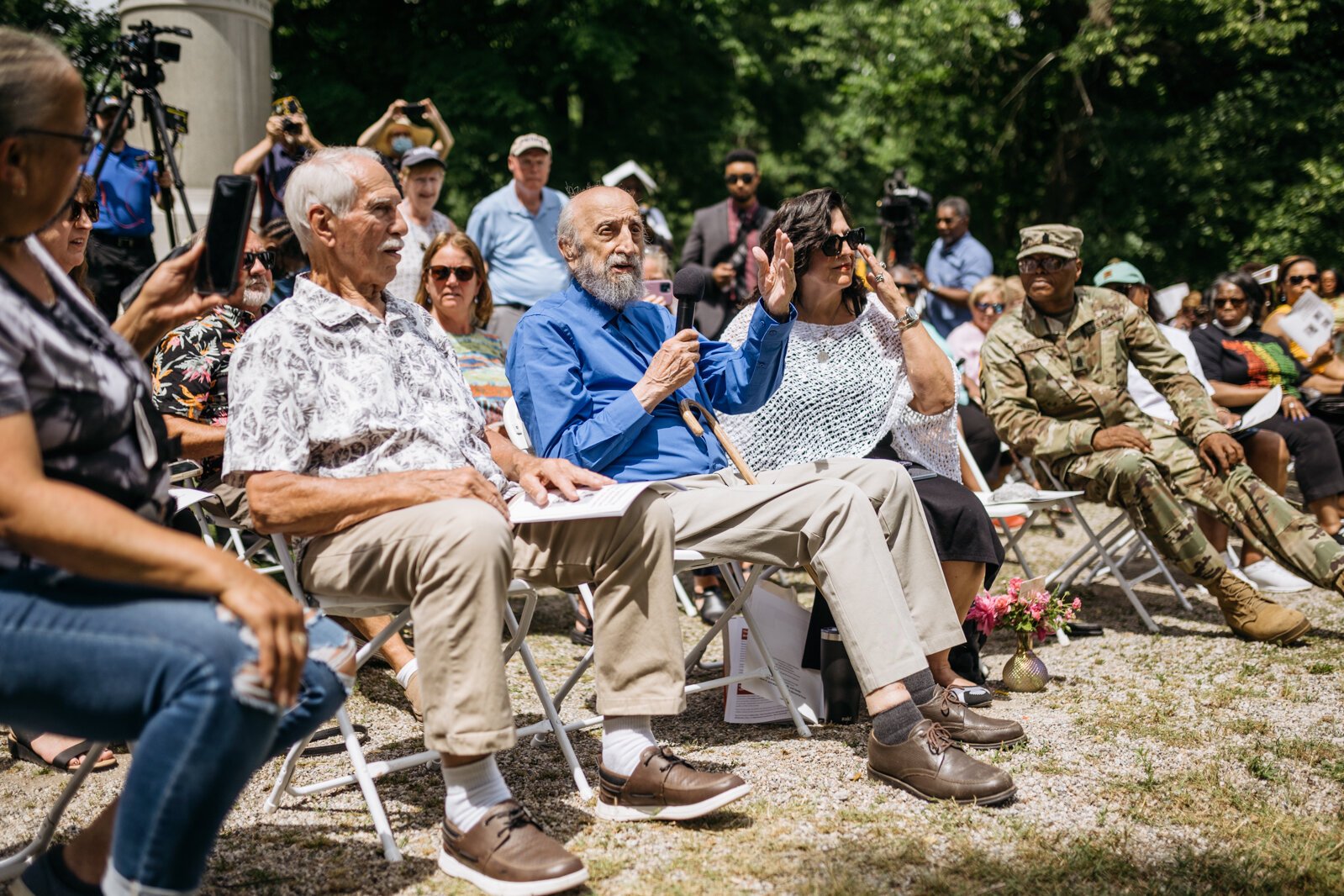 Sculptor John Pappas speaks at the unveiling of the monument.
Pappas tried to imagine what the faces of the soldiers would be like as they made this important life-changing decision.

“Are they wondering? Are they thinking? What’s the story?” he says.

At the same time that Pappas learned the sad history of the USCT, he mourned the death of his wife. He says contemplating the history of the troops and his own personal story of life and death has been on his mind for the past few months.

“A [story] was killing me and the other was trying to open my eyes,” he says.

Pappas says it was “moving and meaningful” to work on the memorial.

“Showing three men in what may have been an intellectual struggle, but at the same time the agony – that stuck with me,” Pappas says. 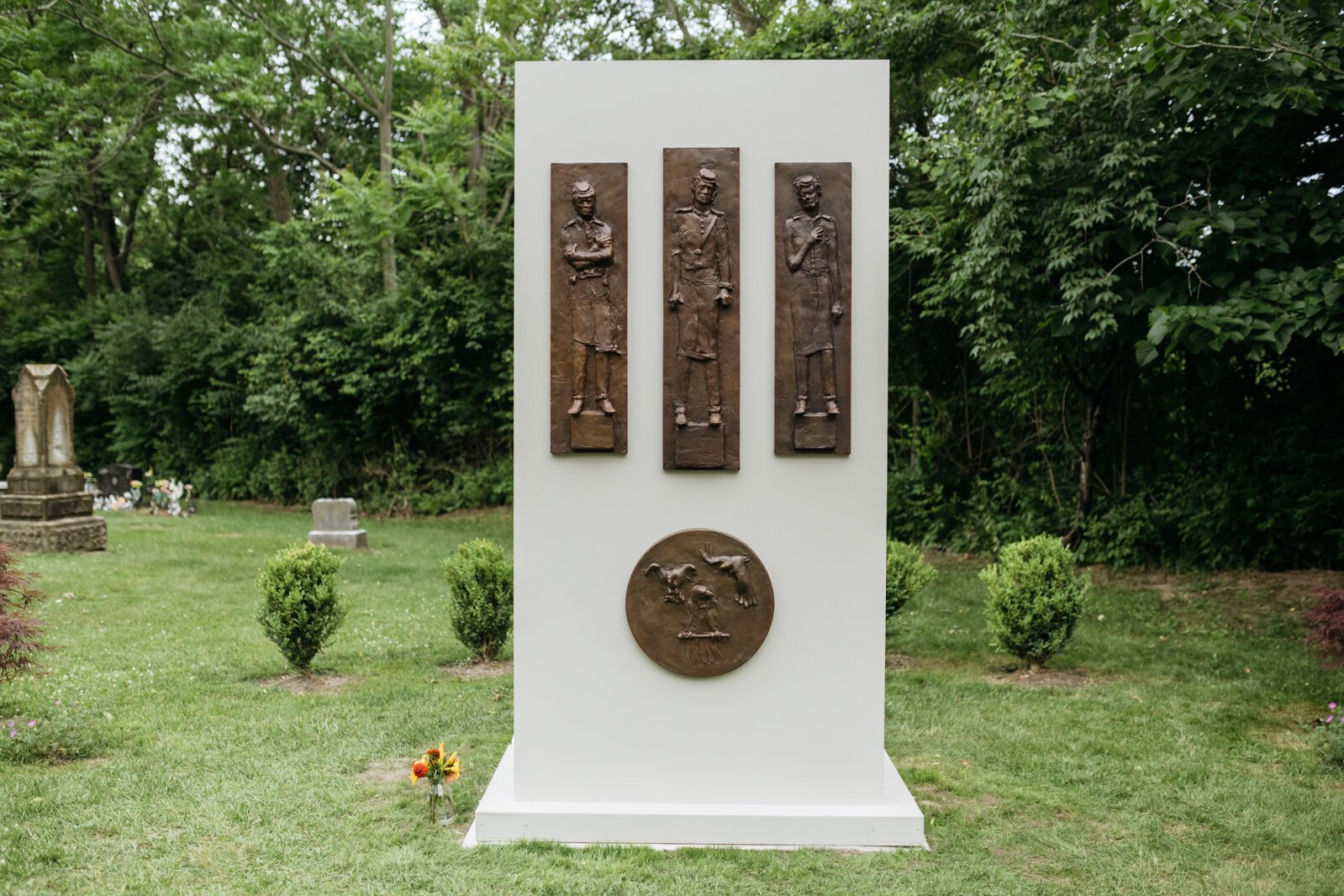 The new Highland Cemetery monument honoring black Civil War veterans who are buried in the cemetery.
Peterson says the story behind USCT also moved him deeply.

“That’s why I wanted to make sure there was a marker here to identify them as an example of those who served,” he says.

More information about the Highland Cemetery is available here. Additional information on Ypsilanti’s Colored Troops and other local stories can be found via Siegfried’s Facebook Page.

Sarah Rigg is a freelance writer and editor in Ypsilanti Township and project manager of On the Ypsilanti field. She joined Concentrate as a news editor in early 2017 and occasionally contributes to other Broadcast Media Group editions. You can reach her at [email protected].

All pictures of Doug Combe.