MEDINA, Ohio — A recent addition to the National Underground Railway Network to Freedom is the Spring Grove Cemetery in Medina.

Opened in 1883, Spring Grove is the final resting place of the people of Medina, many of whom were active in the often harrowing work of resisting slavery, protecting, sheltering and lifting people out of bondage and into freedom.

The National Underground Railroad Network to Freedom program is run by the National Park Service. The program currently lists about 700 sites, facilities and programs across the country which “provide insight into the diverse experiences of freedom seekers who bravely escaped slavery and those who helped them,” the park service said in the announcement.

What do you want to know

To earn this distinction for Spring Grove, the nomination submitted to the NPS featured Harrison Gray Blake and his wife, Elizabeth Bell Blake, abolitionists whose home was a stop on the Underground Railroadsaid Karen Thorn, administrator of Friends of the Cemetery, who led the committee that developed the app.

Their home, still standing at the corner of East Washington and Jefferson streets, is where Elizabeth Blake cooked and helped hide slaves known as “Freedom Seekers”.

A skilled orator, Blake’s often impassioned anti-slavery speeches in Congress are available online. In 1860 he gave one of his most famous speeches, “Freedom does not back downwho rejected any compromise with the south that would support slavery in any form.

The letter, preserved at Oberlin, reads: “Prof. Monroe and Peck, gentlemen, here are five slaves from the house of bondage, whom I need not tell you you will see, they may tell their own story. Yours sincerely &c, HG Blake.

Harrison Gray Blake and his wife, Elizabeth Bell Blake were abolitionists whose home was a stop on the Underground Railroad. (Photo courtesy of Deborah Katz)

Members of Friends of the Cemetery believe that with about 10,000 people buried in Spring Grove, there are many more who were either active on the Underground Railroad or freedom seekers, Thorn said. But the work to identify them must be laborious.

“We feel that anyone who served on the Underground Railroad and resides in our cemetery should be recognized for their efforts,” Thorn said. “Not everyone has a standing home yet, so you may not be able to visit the actual location, but you can still pay your respects and learn more about them by visiting their grave.”

To that end, Thorn is currently writing an addendum to the Friends of the Cemetery submission to add another Medina couple who participated in the Underground Railroad – Herman and Martha Canfield.

A Civil War hero, Lt. Col. Herman Canfield was a noted abolitionist who served as a senator from Ohio and mayor of Medina. He was killed in action at the Battle of Shiloh in 1862.

Martha Canfield had her husband’s body brought back to Medina for burial, then moved her two daughters and two sons south to treat sick and injured soldiers in military hospitals, records show. Spring Grove is an example of the “Rural Cemetery Movement”, which prompted communities to create park-like cemeteries. (Photo courtesy of Deborah Katz)

While working as a nurse, she was able to convince Union General Ulysses S. Grant to have injured and sick soldiers transported to their home countries, records show.

When the war ended, she opened the Canfield Colored Orphan Asylum in the old Charleston Hotel in Memphis, Tennessee.

Excerpts from the diary she kept when she ran the orphanage are available to read online to Tennessee State Library and Archives.

Medina is also home to the Old City Cemetery, which is no longer used for burials, Thorn said. Many buried there were later reinterred by their families in Spring Grove.

With an active membership base, Spring Grove’s Cemetery Friends organization has worked to beautify, preserve and maintain the 34-acre cemetery for the past 25 years, Thorn said. The group celebrated this milestone with the community this month at a picnic in the cemetery.

The park-like setting in Spring Gove is an example of Movement of rural cemeterieswho influenced communities in the early 1800s to create cemeteries with pleasant surroundings for families to gather in, Thorn said.

The Friends of the Cemetery work with the city ​​cemetery commission to implement the master plan 2018. With lakes, gardens, two columbariums and a mausoleum, Spring Grove is the site of walking tours and historical tours. A large carriage entrance and a chapel on the grounds have been completely restored. Important projects can be viewed online.

The Friends of the Cemetery in partnership with the city obtained accreditation by ArbNet and Morton’s Arboretum for the lush, tree-lined public gardens of the cemetery.

The group too publishes a monthly newsletter which features stories about local history and includes genealogical research.

Friends of the Cemetery welcome information about those buried at Spring Grove Cemetery, especially regarding the National Underground Railroad to Freedom. The group can be reached via its website or by calling 330-591-4870. 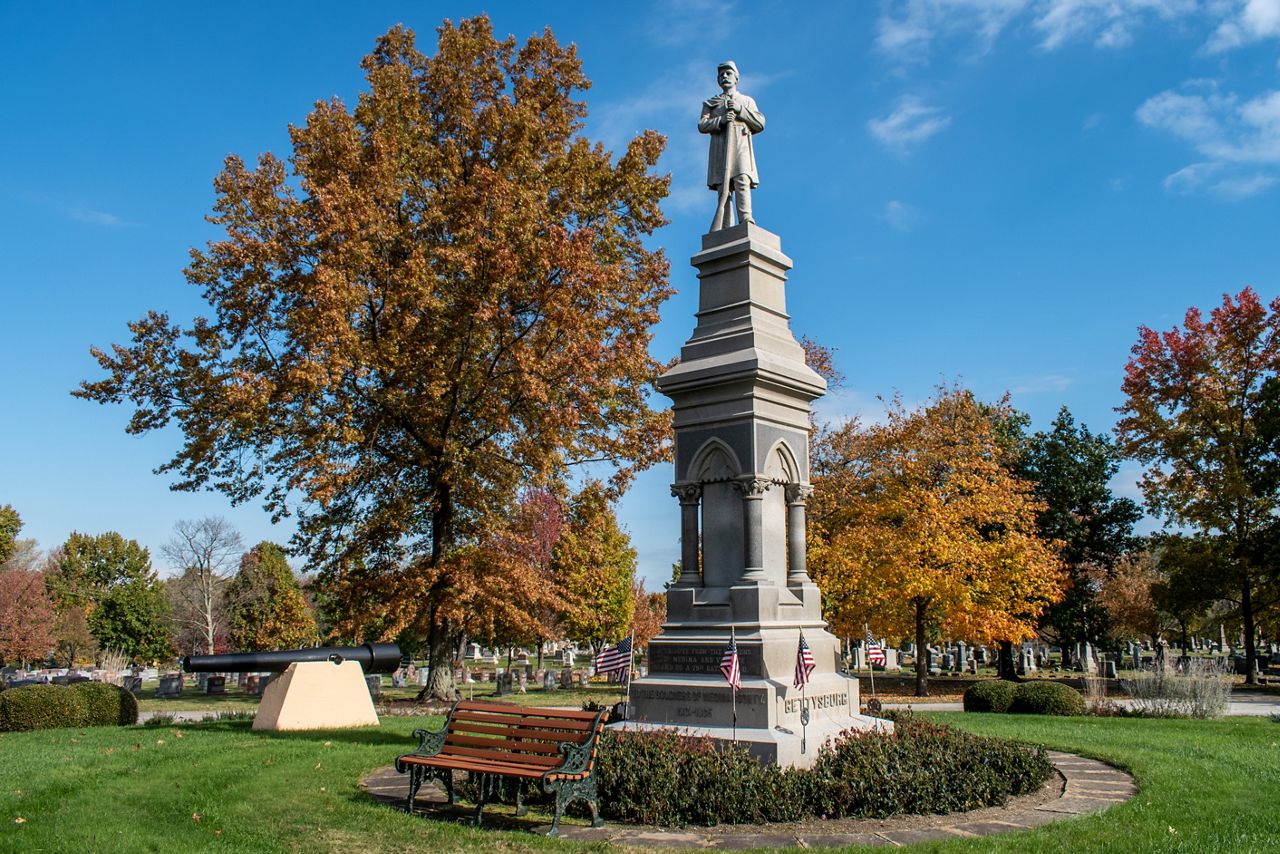 A Civil War hero, Lt. Col. Herman Canfield was a noted abolitionist who served as a senator from Ohio and mayor of Medina. (Photo courtesy of Deborah Katz)