Winds in excess of 80 miles per hour also did not spare Jackson’s Hollywood Cemetery.

“Harold Scott, who is in charge of our cemetery, when he called us the next morning, he said, ‘It looks like a war zone.’ We can’t even move through the streets here between the different areas, the cemetery is blocked off and of course just these huge trees, not tiny little trees but big trees. So that’s a major issue,” said Don Thomson of the Hollywood Cemetery Board.

Several tombstones were left tilted, some with broken fragments on the ground and others completely knocked off the base. The cemetery has headstones dating back to the 1800s, and many trees have stood in this cemetery for over a century. 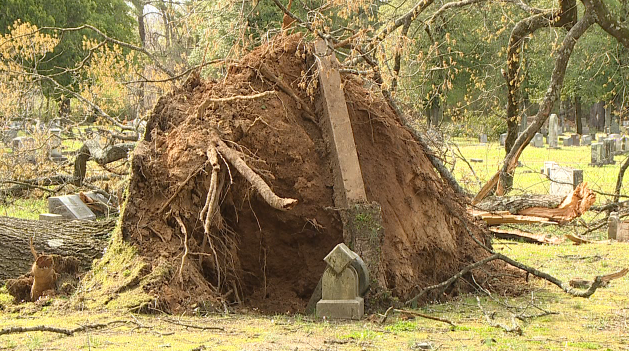 Nearly 11,000 West Tennesseans were interred at the nonprofit cemetery.

Jeff Shepard has many relatives buried there, dating back several generations.

“I remember going to the funeral of some of them when I was a kid, and you don’t think of someone who’s been buried for 50 years and suddenly becomes part of a news story” , Shepard said. “It’s a strange feeling. It’s kind of like going back to when they first died.

Now, the Hollywood Cemetery Board is raising funds to clear the lot of trees and repair the headstones.

Don Thomson says it is imperative to restore the cemetery for those buried and for those who come to visit their loved ones.

“So many people hearing this have ties to Hollywood, and we’re asking them to please, you know, look deep inside themselves and what they would like, someone to help take care of the members. of their family,” Thomson said.

To find more information on how you can help Hollywood Cemetery, Click here.

For more news in the Madison County area, click here.