The two meet near the intersection of Airport Drive and Airport Road in South Burlington, where Burlington International Airport and its aviation subsidiaries surround Eldredge Cemetery on three sides.

The cemetery is nestled between Beta technologies and Heritage Aviation, bordered on two sides by fences with signs that warn, “Federal Law Prohibits Unauthorized Entry.” In the graveyard still, moss and lichen make their way over the headstones, obscuring the names of the dead. Small beeps and flashing lights from the track – nearby, but worlds away – signal the action. From an elevation in the cemetery, you can read the logo on a plane ascending to the southeast; from the same spot, you’ll want to duck and cover your ears to the speed and roar of a fighter jet.

About 220 planes and 1,400 people land at the airport every day. At the cemetery, which operates at a slower location, 573 people have reached their final destination in 225 years. Unidentified soldiers from the War of 1812 and the Civil War are buried here, as well as people whose surnames are familiar to locals: Bostwick, Holbrook, Patchen, Van Sicklen. Generations of some families are buried at Eldredge, including 17 members of the Isham family, whose deaths from 1822 to 2014 span almost two centuries.

Why was a noisy, busy and stressful transit center located next to a few acres of cedar and crabapple trees and dozens of old tombstones?

If this was a NIMBY situation, the opposing voice could belong to the long-lost Samuel Allen. His burial at Eldredge (sometimes spelled Eldridge) in 1797 was the first, according to findagrave.com. But alas, he and those around him – including 13 other Allens – must forever be silent.

BTV, the airport’s codename, arrived in 1920. In 100 years it has grown from a grassy airstrip to a 90-acre complex with two asphalt and concrete runways. Last summer, mainly due to a “massive increase” in private jet operations, BTV hit a three-year high with an average of 348 landings per day, according to acting director Nic Longo.

Despite their clearly different tone and tenor, an airport and a graveyard aren’t such strange bedfellows. Each is well suited to flat terrain and open spaces. For an airport, a site outside the city center, where it can expand, is desirable, Longo said. Across the country, other airports have moved cemeteries to make way for expansion, he said, noting that in Savannah, Georgia, a runway has been built around a headstone.

“We have no intention of doing that in Burlington,” Longo added. 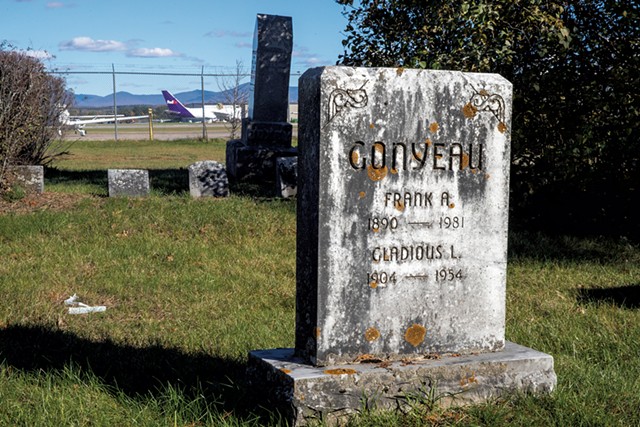 Patrick Healy, President of the Vermont Cemetery Association, wrote via email that early cemetery sites, usually family plots on farms, were sometimes chosen for their views. This makes Eldredge a privileged place. Looking east from the cemetery, past trucks and planes, Mount Mansfield and Camel’s Hump rise in the distance.

“I believe in the past people looked at the aesthetics of the pitch first,” Healy wrote.

His understanding matches information that Thomas Visser, professor of historic preservation at the University of Vermont, discerned from a cursory glance at an 1869 map titled “Plan of the City of Burlington and the City of South Burlington”.

The cemetery, Visser explained, was near a major thoroughfare, Winooski Turnpike, now called Williston Road. In 1869, the Eldredge School was south of the cemetery and a group of residences, about a dozen large lots, surrounded it. Visser assumed it was farmland developed in the common 100-acre parcels on the outskirts of Burlington at the time.

“These historical maps give us an incredible view of a slice of time,” Visser said. “It puts this moment in context. We can see these relationships: the shape of the land, the uses, the density, the transportation routes.”

If the area was farmland and long ago graves were dug on family farms, maybe the Allen family had a farm there. One of those buried at the cemetery is Mary Eldredge Allen (1779-1822). (If these Allens were related to Ethan Allen, who is buried in Greenmount Cemetery in Burlington, they were most likely cousins, according to Dan O’Neil, director of the Ethan Allen Homestead Museum.)

Like Visser, the director of Longo airport values ​​historical documents. He is particularly interested in the history of “aeronautical entities and airports” – but also in “the things around them and how we came to be what we are today”.

“It doesn’t matter what image, diagram or historical photo I look at [of the Burlington airport]the first thing I look for is the cemetery,” Longo said. “That way I have my point of reference.”

There are around 800 plots open in Eldredge, according to the 2019 survey, Kinville said. Some are close to the airfield, a location coveted by some. These folks are plane spotters and aviation fans who want to be buried near the action. Recently, a man purchased the cemetery’s main viewing ground, in its northeast corner; a large black headstone is already in place.

An Eldredge lot is 3.5 feet by 10 feet and costs $400 for a South Burlington resident, making it cheaper to stay put for eternity than to fly out for the weekend.