An outdoor Veterans Day service was held an hour after sunrise at the Iowa Veterans Cemetery, where more than 6,000 Iowa veterans are buried.

â€œBe with us in this sacred land where many of our veterans have gathered and where many of the nation’s heroes lie,â€ said Iowa National Guard Chaplain Lucas Murphy as he spoke. an opening prayer. â€œâ€¦ To honor our veterans, let every American find reasons to love, not hate and the strength to build, not to destroy. Renew our feeling of unity through times of trials and difficulties.

Governor Kim Reynolds noted that November 11 was renamed Veterans Day in 1954, to honor generations of Americans who served in the military for more than two centuries.

â€œOur state’s veterans hold a distinguished place in this history (with) their honorable service, as well as that of their families and our Gold Star families who made the ultimate sacrifice,â€ she said. 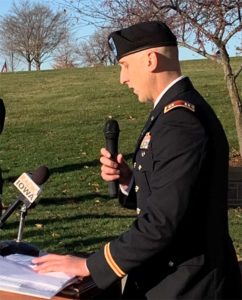 Captain Kevin Waldron, deputy director of public affairs for the Iowa National Guard, reminded the crowd that the start of the liberation of the Western Front in World War II began 77 years ago.

â€œA piece of history that includes the 34th Infantry Division, a National Guard division filled with soldiers primarily from Iowa, Minnesota and the Dakotas,â€ he said. â€œIn the spring of 1944, the Red Bulls – as the division is known today – fought a series of decisive battles across Italy. Despite fierce fighting and difficult terrain, the Red Bulls managed to break through and eventually led them to Rome, where they helped liberate this ancient city and set the conditions for Germany’s surrender.

Waldron, who was the service’s keynote speaker, completed a tour of duty in Afghanistan in 2018. He briefly summed up a key battle that Iowa National Guard soldiers fought a decade ago. 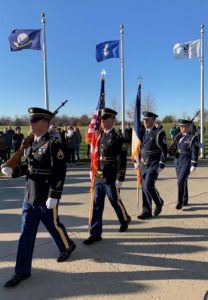 â€œIn May 2011, 41 members of the 1st Battalion, 133rd Infantry of the Iowa National Guard participated in Operation Titanium Tiger, later known as the Battle of Do Ab. are beaten for nearly 12 hours to regain control of the Do Ah district center in Nuristan province, Afghanistan, â€he said. “Thanks to the heroic efforts of several Iowa residents, no casualties were suffered.”

Waldron asked for a minute’s silence to honor the 2,061 American soldiers who died in the 20-year war in Afghanistan. As the flags of the Veterans Cemetery flapped in the brisk breeze, strokes were played to conclude today’s service. More than 700 Iowa veterans from wars dating back to the middle of the last century were buried at the Iowa Veterans Cemetery in 2020.