Clemson University researchers are working to tell the story of the African Americans who were buried at woodland cemetery dating from the early 1800s.

The cemetery, originally known as Cemetery Hill, borders Clemson University Memorial Stadium and is marked by the family cemetery of former Vice President John C. Calhoun in the center.

It was also long the resting place of a number of slaves who worked at Clergy Hall, a four-room house owned by the Reverend James McElhenny. The house and property later became Calhoun’s Fort Hill Plantation in the early 1800s, where as many as 139 slaves lived over the years, according to the Woodland Cemetery website.

Between 1865 and 1915, black sharecroppers and prisoners who helped build Clemson’s Agricultural College would also be buried in the cemetery. Since 1924, when it was reincorporated as Woodland Cemetery, it has been the resting place of a number of Clemson employees, including former Clemson Chairman Walter Riggs, who had the idea of ​​opening the cemetery to college employees, and was Clemson’s first employee. buried there in 1924. 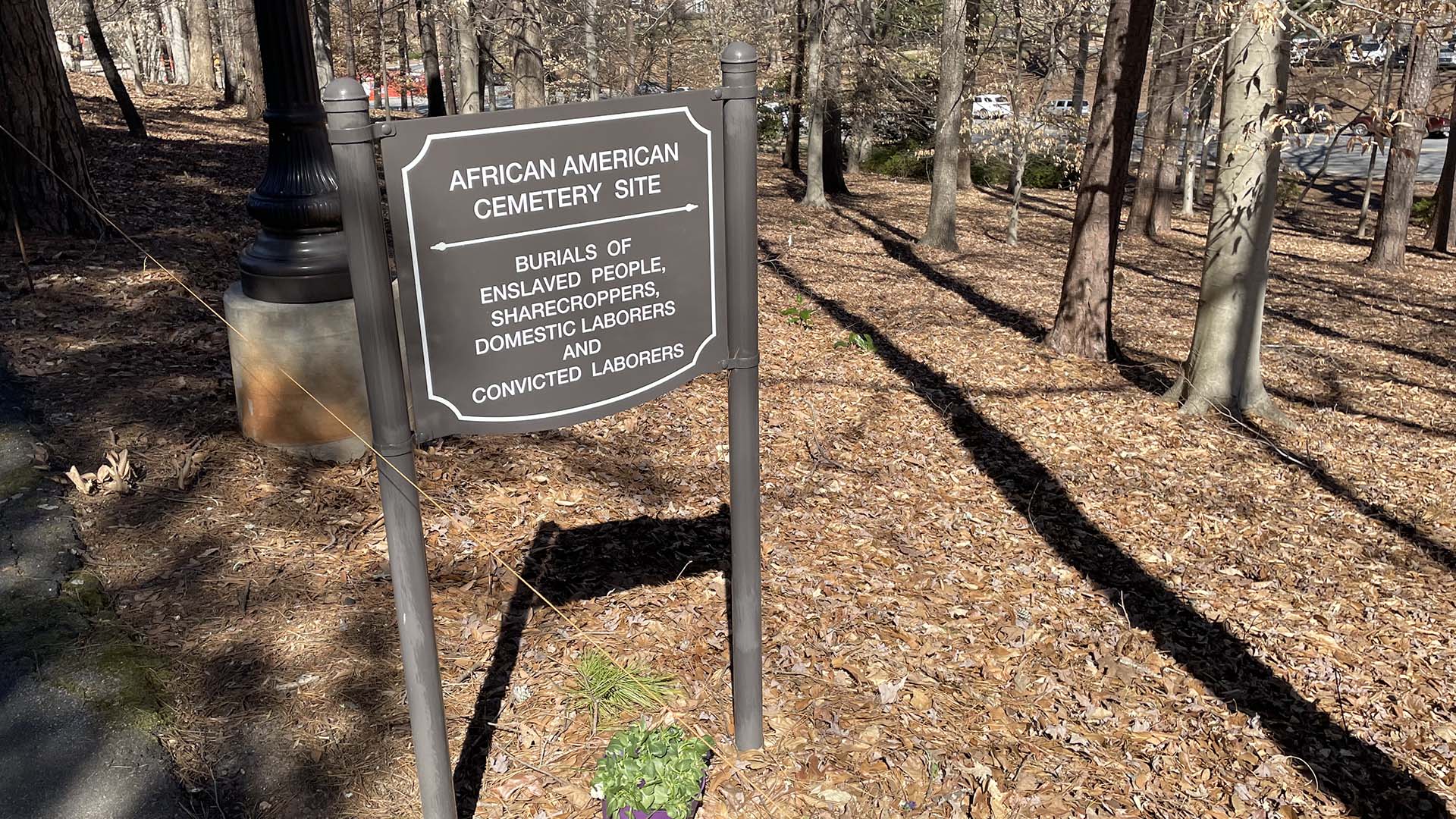 The cemetery reveals its secrets

The rich history of the site has become a more recent focus of the university as researchers uncover more of it. In 1946, a Clemson Building and Grounds Committee believed the cemetery held graves of slaves and convicts. In 1960, Clemson College obtained a court order to move several graves from the west side of the cemetery to the south side for the “orderly and proper development of the campus”.

It is unclear how many slaves were buried in the area, mainly because slave owners kept poor records and death certificates were not required in South Carolina until 1915. Instead , combined with information from previous decades, the researchers used newer technology to peer into the tombs without having to disturb them. Ground-penetrating radar (GPR), which uses radar pulses to detect anomalies in the underlying ground, has so far identified 667 unmarked graves, the first of which was discovered in July 2020. 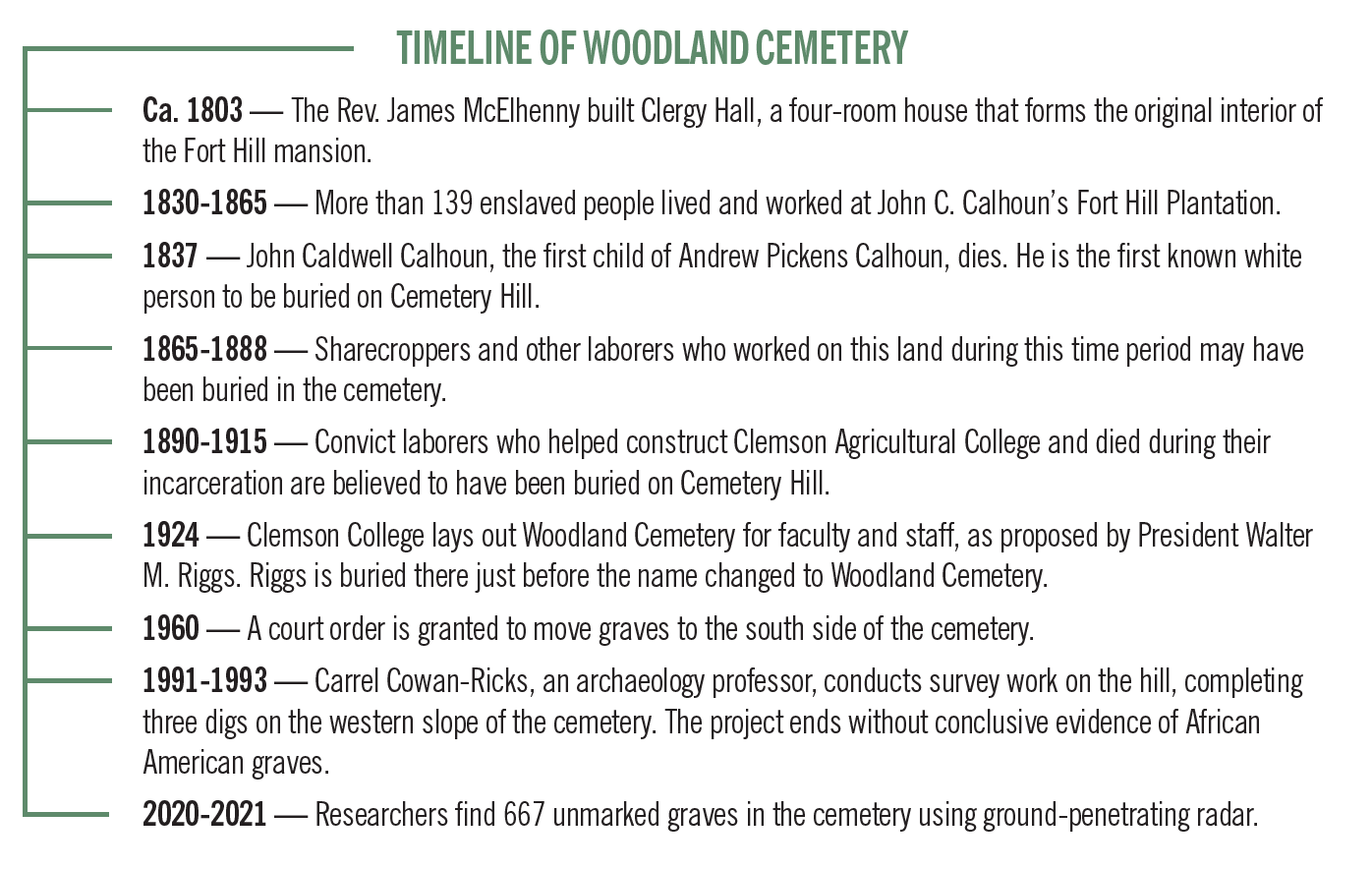 Dr. Rhondda Thomas, Research and Community Engagement Coordinator for the African American cemetery and Woodland Cemetery Historic Preservation Project, has been involved with the project since 2020 when students approached her about preserving the south side of the cemetery. At that time, the site was littered and surrounded by a broken fence. The preservation group has since cleared the area, removed broken fences and identified a number of unmarked graves on the southern slope of the hill.

Thomas led the “call my name“ project, collecting stories and recognizing the contributions of African Americans at Clemson University dating back to the 18th century. The Woodland Cemetery is now part of the project.

“We’re still very much in research mode,” Thomas said. In 2020-2021, researchers found 667 unmarked burial sites throughout the cemetery, many of which lie outside the current boundaries, including a number of graves in unmapped parts of the cemetery and under paved roads. The researchers said they wanted to reconstruct the paved path through the cemetery to avoid any unmarked graves.

Carrel Cowan-Ricks, a black historical archaeologist who worked with Clemson University in the early 1990s and was instrumental in researching Cemetery Hill, found evidence that the west side of the cemetery was used for slaves before 1837. According to a Upcountry Historical articlethe papers Cowan-Ricks had written were then used to help teams uncover graves using the GPR, along with oral history and slave lists.

The researchers do not intend to dig up the buried bodies, as most of them would have completely decomposed due to the acidity of the soil. Instead, they hope to continue their search so that everyone buried there will have a voice.

“We will do our due diligence to make sure each person is honored,” Thomas said.

Clemson University employees may still be buried in the cemetery, provided they have been at the university for at least 20 years.